Ryshot Yanks Seastar of Arnac, pet name Mink, was Chrissie’s first Chesapeake, her friend and shadow and a perfect foundation bitch for the Arnac kennel. At that time there were less than ten known Chesapeakes in the UK. The Arnac kennel name was registered in 1977 under Chrissie’s previous name of Lady Spencer-Smith and the first Arnac litter was born later that year.

Mink had five litters and produced lovely puppies that went far and wide, including Norway, Sweden, Finland, and the first Chesapeake in Australia (Ch Arnac Bay Buzzard). Many of the pups provided foundation dogs for other kennels in the UK, including Penrose, Chesepi, Chesabay and Barklands .

Realising that the UK needed new bloodlines, a male was imported, unseen, from the USA.  Unfortunately he arrived with only one testicle (despite assurances that he had two when he left the USA!) A lesson was learnt and so Chrissie decided to go and find a breeder she could trust with the type of dogs she liked. She found Karen and Ronnie Anderson of Chestnut Hills kennels in Maryland. A puppy was ordered and eventually arrived. This dog, with an amazing coat unlike any seen in the UK before,  grew into the most handsome dog who proved to be an outstanding sire. His name was Chestnut Hills Arnac Drake. Having made his mark in the UK,  Drake later took a brief holiday in his homeland to gain his USA Championship and sire a few litters while he was there.

The combination of Mink and Drake in just two litters produced outstanding puppies that not only won major awards in the show ring but included the first three Chesapeakes to win awards in UK Kennel Club field trials.

Chrissie has, over the years, imported eleven dogs from the Chestnut Hills kennel in the USA and three from the Doublecoats kennel in Sweden to provide further bloodlines for the UK.

Every dog or bitch bred from has to fulfil her criteria of being a good example of the breed, have an aptitude for work and, most importantly, have a good temperament.

The Arnac family continued with these fresh bloodlines but every Arnac-bred puppy can be traced back to her great foundation bitch, Mink.

I kept a bitch from the Mink x Drake matings born 1982 – the great Arnac Bay Delta (more about her later). Unfortunately I could never get any pups from her and so I took a pup from her sister Arnac Bay Enigma of Chesabay when she was bred to a dog I imported for Yvonne Medlicott in New Zealand. At that time all dogs going from USA to NZ had to come to the UK for quarantine first. This dog was Chestnut Hills Ty of Kahilani. 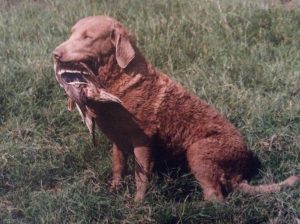 Anyway, the pup I had was named Chesabay Crystal for Arnac (pet name Kiwi), an ash brown colour, a great worker, and beautifully put together. Here she is being shown at Crufts where she went Best of Breed, and with a good retrieve of a Mallard. She was born in 1987 and was to produce some lovely pups that are in many UK pedigrees including Arnac Bay Jetsam, Arnac Bay Jibsail (Sweden) and Arnac Bay Kennebec at Seganti who did so well for theAtkinsons.